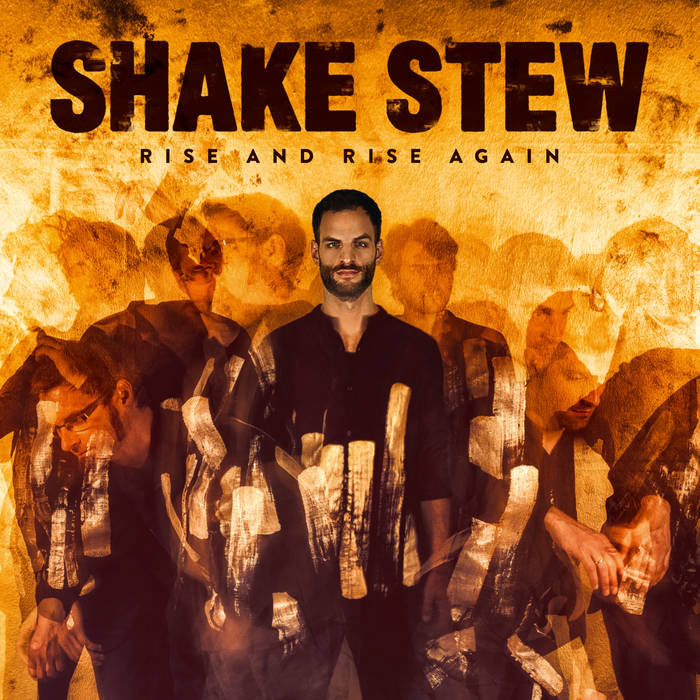 Paco All their albums are fantastic. Favorite track: Fall Down Seven Times....

SHAKE STEW is Austria‘s jazz band of the hour. After playing more than 25 gigs during the first months since premiering at Jazzfestival Saalfelden 2016 and selling out their first record „The Golden Fang“ within half a year, the unique septet is conquering the music world with a hypnotic mixture of afrobeat and jazz grooves shaken up by the intense and mysterious soundscapes created with a combination of two drummers and two double bass players! With „Rise And Rise Again“ Shake Stew are releasing their highly anticipated second album in May 2018, which also features Shabaka Hutchings on 2 of the tracks. Everywhere they went so far, the press has been more than enthusiastic, often trying to create new terms and genre-labels to put their live experiences into words and this new release will only further establish their status as one of Europe's most upcoming Jazzbands.

Shake Stew brings together seven unconventional musicians, all of them interesting characters of the young Austrian and German jazz scene. They are united with bandleader Kranzelbinder (1988) by the pursuit of new, enhanced sound possibilities and by concepts beyond boundaries of genre, which are by now already considered a guarantee with Kranzelbinder. His own distinct combination of virtuosity, entertainment and uncompromising energy comes out in many of his projects and has meanwhile become a kind of trademark of the hard working musician, composer, and arranger. As the youngest musician so far in the history of the prestigious Jazzfestival Saalfelden, he was chosen to put together a new project for the festivals opening concert in 2016, which is also connected with a 4 day residency. He put together a septet and prepared the festival show for a whole year, before not only recording the debut album “The Golden Fang” within a day of the residency but also playing a concert to remember: Der Standard from Vienna describes the septet’s performance as a „magical opening hour“, to the Kurier Shake Stew sounds „like an intergalactic road movie for the ears.“ The Süddeutsche Zeitung calls the bassist and composer Kranzelbinder a whizz kid and the OÖN added: „The 28-year-old writes fantastic pieces, which optimally feature the exciting instrumentation with its three-part horn section and two basses and drummers“.

From this point on Shake Stew was on a unique journey. In their 6 month residency as a Stage Band they managed to sell out Viennas biggest jazz club Porgy & Bess for every show, developing and presenting a new program at each of their performances. When Kranzelbinder invited Shabaka Hutchings for one of the evenings, the musical and spiritual connection between Shake Stew and the Tenor Wizard was felt almost immediately. Right after a 4 day tour they went into the studio and recorded an album that reflects the many musical souls that lie within this group of musicians.

During the course of 6 tracks “Rise And Rise Again” reveals as many different energies as musical influences, always taking the listener by surprise with the vast possibilities of instrumentation that this young group offers between its members. “Everytime I was playing a live show with Shake Stew, I felt that this band has the power to send out a very strong musical energy to the audience. So I wanted to create an album that people can put on to get six different kind of tracks, each with a unique energy, lifting them to different levels so that they can rise with the music as well as fall down and land softly with it – only to rise again and drift away to a different place once again. Basically you can choose the kind of track that fits to your current mood or the mood you want to be taken too. For me, only the power of music can do that.” Behind this idea stands a band that works on the highest level of musical skills. Driven and relentless beats set off this record, with “Dancing in the Cage of a Soul” slowly introducing each instrument but soon developing into a jubilant anthem that sets off a spirited tenor saxophone solo by Johannes Schleiermacher rising above the shivery rhythm section. “How We See Things” fully utilizes the spectrum of acoustic possibilities by using Shabaka Hutchings as a guest and therefore having three tenor saxophones playing a theme above a tranquilizing and addictive pattern played by both double basses that reflects the strong influence of african music in the composers cosmos. At the time trumpet player Mario Rom starts to take the listener under his spell with a beautifully ruminant solo, any kind of resistance is already futile. Featuring his soloists with lengthy and excessive spots to fully express themselves is a notable trademark of Kranzelbinders compositions and with “Goodbye Johnny Staccato” he wrote a theme tailor-made for tenor saxophonist Schleiermacher. Referring to a TV show about a detective/jazz musician in the late 60ies this piece of music unravels all kinds of musical layers during its twelve minute tour de force, including reminiscences of old soundtracks and Italian restaurants. The 2 parts of “Fall Down Seven Times, Get Up Eight” then reflect the dynamic journey that Shake Stew is capable of, with two double basses setting up a vast space for the trumpet to develop a captivating solospot. As soon as the rhythm section gets going with intelligent use of the three available bassdrums in “Get Up Eight” and the horns start another praising, nearly gospel-like chorus you can feel the presence of Shakaba Hutchings growing with each bar. His solo starts on top of two basses laying down a virtuosic carpet of interlocking sixteen notes and from there on you already guess the highly energetic climax this journey is bound to. With the most stand out song of this album being at the end, “No Sleep My King” feels like an epilogue that – once you lost yourself in its vibe – fully lets you drift away on the repetitive bassline, the moroccan field recordings or the remarkable alto solo by Clemens Salesny.